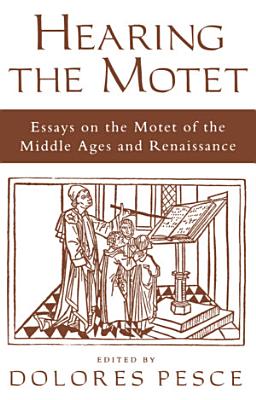 The motet was unquestionably one of the most important vocal genres from its inception in late twelfth-century Paris through the Counter-Reformation and beyond. Heard in both sacred and secular contexts, the motet of the Middle Ages and Renaissance incorporated a striking wealth of meaning, its verbal textures dense with literary, social, philosophic, and religious reference. In Hearing the Motet, top scholars in the field provide the fullest picture yet of the motet's "music-poetic" nature, investigating the virtuosic interplay of music and text that distinguished some of the genre's finest work and reading individual motets and motet repertories in ways that illuminate their historical and cultural backgrounds. How were motets heard in their own time? Did the same motet mean different things to different audiences? To explore these questions, the contributors go beyond traditional musicological methods, at times invoking approaches used in recent literary criticism. Providing as well a cutting-edge look at performance questions and works by composers such as Josquin, Willaert, Obrecht, Byrd, and Palestrina, the book draws a valuable new portrait of the motet composer. Here, intriguingly, the motet composer emerges as a "reader" of the surrounding culture--a musician who knew liturgical practice as well as biblical literature and its exegetical traditions, who moved in social contexts such as humanist gatherings, who understood numerical symbolism and classical allusion, who wrote subtle memorie for patrons, and who found musical models to emulate and distort. Fresh, broad-ranging, and unique, Hearing the Motet makes vital reading for scholars, performers, and students of medieval and Renaissance music, and anyone else with an interest in the musical culture of these periods. Contributors include Rebecca A. Baltzer, Margaret Bent, M. Jennifer Bloxam, David Crook, James Haar, Paula Higgins, Joseph Kerman, Patrick Macey, Craig Monson, Robert Nosow, Jessie Ann Owens, Dolores Pesce, Joshua Rifkin, Anne Walters Robertson, Richard Sherr, and Rob C. Wegman.

Authors: Dolores Pesce
Categories: Music
The motet was unquestionably one of the most important vocal genres from its inception in late twelfth-century Paris through the Counter-Reformation and beyond.

The World of William Byrd

Authors: John Harley
Categories: Music
In The World of William Byrd John Harley builds on his previous work, William Byrd: Gentleman of the Chapel Royal (Ashgate, 1997), in order to place the compose

The Cambridge Companion to the Council of Trent

Authors: Nelson H. Minnich
Categories: History
This volume brings together the latest scholarship on the principal issues treated at the Council of Trent, including how the Roman Catholic Church formulated i

Authors: John Harley
Categories: Music
John Harley’s Thomas Tallis is the first full-length book to deal comprehensively with the composer’s life and works. Tallis entered the Chapel Royal in the

William Byrd, a Guide to Research

Authors: Jane Couchman
Categories: Literary Criticism
Over the past three decades scholars have transformed the study of women and gender in early modern Europe. This Ashgate Research Companion presents an authorit

Authors: Colleen Reardon
Categories: Music
"This two-tiered approach makes the book of compelling interest to scholars of women's studies and Italian culture and history as well as to musicologists."--BO