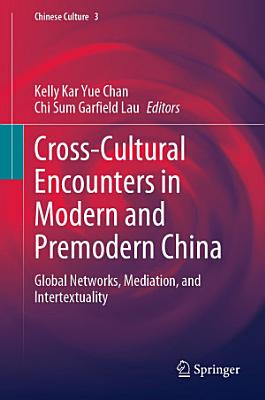 This book presents an essential contribution to approaches in the studies of film, literature, performance, translation, and other art forms within the Chinese cultural tradition, examining East-West cultural exchange and providing related intertextual dialogue. The assessment of cultural exchange in the East-West context involves the original source, the adapted text, and other enigmatic extras incurred during the process. It aims to evaluate the linkage among, but not limited to, literature, film, music, art, and performance. The sections unpack how canonical texts can be read anew in modern society; how ideas can be circulated around the world based on translation, adaptation, and reinvention; and how the global networks of circulation can facilitate cultural interaction and intervention. The authors engage discussions on longstanding debates and controversies relating to Chinese literature as world literature; reconciliations of cultural identity under the contemporary waves of globalization and glocalization; Chinese-Western film adaptations and their impact upon cinematic experiences; an understanding of gendered roles and voices under the social gaze; and the translation of texts from intertextual angles. An enriching intellectual, intertextual resource for researchers and students enthusiastic about the adaptation and transformation process of different genres, this book is a must-have for Sinophiles. It will appeal to world historians interested in the global networks of connectivity, scholars researching cultural life in East Asia, and China specialists interested in cultural studies, translation, and film, media and literary studies.

Authors: Kelly Kar Yue Chan
Categories: China
This book presents an essential contribution to approaches in the studies of film, literature, performance, translation, and other art forms within the Chinese

Authors: K. Attar
Categories: Literary Criticism
Drawing from theatre, English studies, and art history, among others, these essays discuss the challenges and rewards of teaching medieval and early modern text

The Rise of Western Power

Authors: Jonathan Daly
Categories: History
In this second edition of The Rise of Western Power, Jonathan Daly retains the broad sweep of his introduction to the history of Western civilization as well as

Authors: Candice Goucher
Categories: History
World History: Journeys from Past to Present uses common themes to present an integrated and comprehensive survey of human history from its origins to the prese

Authors: Gang Deng
Categories: Technology & Engineering
Challenging the stereotype of premodern China as an agricultural nation, this book examines the development of the maritime sector, maritime institutions, and s

An American Pioneer of Chinese Studies in Cross-Cultural Perspective

The English Renaissance and the Far East

Authors: Adele Lee
Categories: Literary Criticism
This book offers a timely examination of cultural encounters between Britain, China, and Japan, past and present. It challenges Edward Said’s model of East/We

Ancient China and the Yue