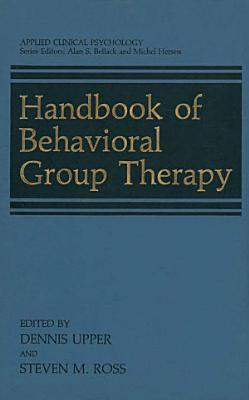 In 1977, the current editors contributed a review article on behavioral group therapy to a volume of Hersen, Miller, and Eisler's Progress in Behavior Modi fication series (1977). At that time we noted that, despite the advantages to both clinicians and clients of conducting behavioral treatments in groups, clinical developments and research in this area were still at a relatively rudimen tary level. The majority of studies in the behavioral group therapy literature we reviewed reported the direct transfer of an individual behavior therapy pro cedure, such as systematic desensitization, to a group of clients with homoge neous problems, such as snake phobia or test anxiety. Groups were used in many studies merely to generate sufficient numbers of subjects to allow various types of interventions to be compared, rather than to examine group process variables per se. Only a limited amount of attention had been given to whether these group interaction variables (such as group discussion, sharing ideas and feelings, and mutual feedback and reinforcement) might enhance individually oriented procedures applied in a group. The 8 years since this original chapter was written have seen a significant growth in both the breadth and depth of clinical research and work in the behavioral group therapy field. This growth was documented in part in a three volume series on behavioral group therapy by the current editors (Upper & Ross, 1979, 1980, 1981).