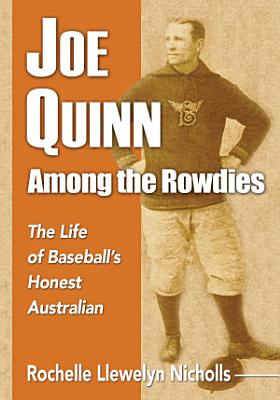 GET BOOK
Joe Quinn Among the Rowdies Book Description:

“A gentleman when the game was hard-bitten, played by rough-and-ready lads out to win whatever the cost....” Australia had few sporting heroes in the years preceding its federation in 1901. But before its 20th-century Olympic trailblazers, and Depression-era icons such as Phar Lap and Don Bradman, came an Australian sporting pioneer who was celebrated on the most glamorous stage in the world—American major league baseball. Joe Quinn’s story has long been lost in the land of his birth. This tale gallops from the deprivation of famine-ravaged Ireland through colonial Australia to the raucous ballfields of 19th-century America, with their unruly players and owners, brawls and adulation and backroom betrayals. Through 17 seasons in the major leagues, “Undertaker” Joe Quinn earned his place among the colorful characters who pioneered the modern game of baseball, as much for his ability to stand apart from their bad behavior as for his steadfastness on the field. Meet Australia’s first professional baseball player and manager, whose willingness to “have a go” in the grand Australian tradition will live long in the minds of sports fans on both sides of the Pacific.