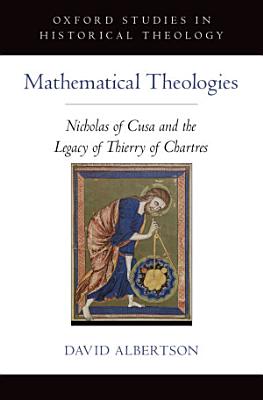 The writings of theologians Thierry of Chartres (d. 1157) and Nicholas of Cusa (d. 1464) represent a lost history of momentous encounters between Christianity and Pythagorean ideas before the Renaissance. Their robust Christian Neopythagoreanism reconceived the Trinity and the Incarnation within the framework of Greek number theory, challenging our contemporary assumptions about the relation of religion and modern science. David Albertson surveys the slow formation of theologies of the divine One from the Old Academy through ancient Neoplatonism into the Middle Ages. Against this backdrop, Thierry of Chartres's writings stand out as the first authentic retrieval of Neopythagoreanism within western Christianity. By reading Boethius and Augustine against the grain, Thierry reactivated a suppressed potential in ancient Christian traditions that harmonized the divine Word with notions of divine Number. Despite achieving fame during his lifetime, Thierry's ideas remained well outside the medieval mainstream. Three centuries later Nicholas of Cusa rediscovered anonymous fragments of Thierry and his medieval readers, and drew on them liberally in his early works. Yet tensions among this collection of sources forced Cusanus to reconcile their competing understandings of Word and Number. Over several decades Nicholas eventually learned how to articulate traditional Christian doctrines within a fully mathematized cosmology-anticipating the situation of modern Christian thought after the seventeenth century. Mathematical Theologies skillfully guides readers through the newest scholarship on Pythagoreanism, the school of Chartres, and Cusanus, while revising some of the categories that have separated those fields in the past.

Authors: David Albertson
Categories: Religion
The writings of theologians Thierry of Chartres (d. 1157) and Nicholas of Cusa (d. 1464) represent a lost history of momentous encounters between Christianity a